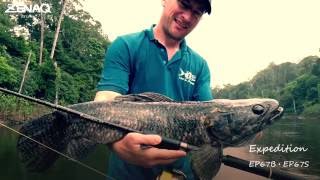 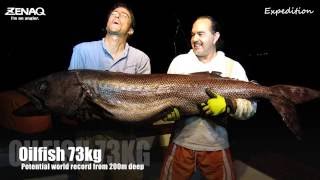 The Expedition is ZENAQ’s travel rod series, designed for ease of use while traveling the globe. This range of rods has all the characteristics that define ZENAQ’s other models: power, durability, and smooth action. Although most models in the Expedition series break down into three pieces, the rods still have the sensitivities and actions of one-piece blanks.  Whether backpacking in the mountains, canoeing down rivers, or horse trekking in the jungle, the Expedition series supports your pursuit of the fish of a lifetime. These rods were designed to fish well in a multitude of situations, thereby allowing you to pack lighter and travel farther to reach the fish that nobody could before. Unmatched versatility and performance make the Expedition series the premier travel rods for anybody looking to trek off the beaten path for the most remote species on Earth.

Length: 6'7" / Lure: 13-70g / PE Line: MAX#3
EP67 models are three-piece rods that can be used for both fresh and saltwater species. Although they may appear light and delicate, the chance of the rod breaking is low due to our proprietary carbon’s extreme strength. The EP67 is the Expedition series’ answer to anglers pursuing small and medium gamefish at the far reaches of the globe.

These models are ideal for species such as barramundi, peacock bass, toman, tigerfish, pike, black bass, bonefish, triggerfish, and permit, just to name a few.

The EP83S has the power needed for anglers targeting small GT and tuna arojund 30kg from boat. The rod’s action is tailored to perform like a one-piece rod, so that angler can fight the fish instead of his rod, as is the case with most other travel rods. The rod can also be successfully used as a big game rod for large freshwater gamefish, given its strong butt section’s ability to pull these large predators out of heavy cover.

Length: 8'3" / Lure: ~180g / PE Line: MAX#8
EP83-6 has been developed for large GTs and other powerful saltwater gamefish. Its power is similar to other offshore rods of the same weight class, allowing it to cast and work a wide range of lures up to 180g. This rod does not sacrifice any strength despite its three-piece design and can handle the immense strain even large GTs put gear and anglers through.

Length: 5'5" / Lure: ~450g / PE Line: MAX#6
EP55-14 models are two-piece heavy jigging rods with jig weight sweet spots in the range of 200-350g. The models’ two-piece designs break at the handle of the rod, allowing for anglers to carry the rods in airplane cabins during their travels. The rods feature parabolic action, increasing the force anglers can exert to win the toughest fights against the largest and hardest-fighting big-game species.

These models are ideal for species such as dogtooth, yellowfin, and bluefin tuna, kingfish, amberjack, grouper, oilfish, and many others.